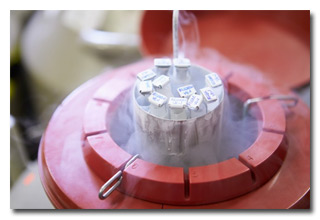 Sperm bank, semen bank or cryobank is a facility that collects and stores human sperm mainly from sperm donors, primarily for the purpose of achieving pregnancies through third party reproduction, notably by artificial insemination.

The development of sperm banks, whilst considered by some to be controversial, has enabled women to have greater control over their reproductive lives. By providing sperm from donors who are checked and screened, thousands of women every year are able to bear their own children in circumstances where this might otherwise not be possible. Controversy stems from the fact that donors effectively father children for others, often in considerable numbers, and usually take no part in the upbringing of such children, and also from the fact that single women and coupled lesbians frequently use sperm banks in order to have their own biological children.

The increasing range of services which is available through sperm banks nevertheless enables more people to have choices over the whole issue of reproduction. Women may choose to use an anonymous donor who will not be a part of family life, or they may choose known donors who may be contacted later in life by the donor children. Women may choose to use a surrogate to bear their children, using eggs provided by the woman and sperm from a donor.

Men who choose to donate sperm through a sperm bank also have the security of knowing that they are helping women or childless couples to have children in circumstances where they, as the biological father, will not have any legal or other responsibility for the children produced from their sperm.

However, in many parts of the world sperm banks are not allowed to be established or to operate. Most societies are built upon the family model and sperm banks may be seen as a threat to this, particularly where a sperm bank makes its services available to unmarried women.

Where sperm banks are allowed to operate they are often controlled by local legislation which is primarily intended to protect the unborn child, but which may also provide a compromise between the conflicting views which surround their operation. A particular example of this is the control which is often placed on the number of children which a single donor may father and which may be designed to protect against consanguity: low limits are often provided which in reality appear more intended to placate those who would be opposed to sperm donors producing tens or scores of children as to provide a justifiable safeguard. However, such legislation usually cannot prevent a sperm bank from supplying donor sperm outside the jurisdiction in which it operates, and neither can it prevent sperm donors from donating elsewhere during their lives. There is an acute shortage of sperm donors in many parts of the world and there is obvious pressure from many quarters for donor sperm from those willing and able to provide it to be made available as safely and as freely as possible.

The sperm is stored in small compartments or straws of holding between 0.4 and 1.0 ml and cryogenically preserved in liquid nitrogen tanks. It has been proposed that there should be an upper limit on how long frozen sperm can be stored.

Sperm supplied by a sperm bank may be used where a woman's partner is infertile or where he carries genetic disease. Increasingly, donor sperm is used to achieve a pregnancy where a woman has no male partner, including among lesbian and bisexual mothers-to-be. Sperm from a sperm donor may also be used in surrogacy arrangements and for creating embryos for embryo donation. Donor sperm may be supplied by the sperm bank directly to the recipient to enable a woman to perform her own artificial insemination which can be carried out using a needle-less syringe or a cervical cap conception device. The cervical cap conception device allows the donor semen to be held in place close to the cervix for between six to eight hours to allow fertilization to take place. Alternatively, donor sperm can be supplied by a sperm bank through a registered medical practitioner who will perform an appropriate method of insemination or IVF treatment using the donor sperm in order for the woman to become pregnant.
From a medical perspective, a pregnancy achieved using donor sperm is no different from a pregnancy achieved using partner sperm, and it is also no different from a pregnancy achieved by sexual intercourse.

Sperm banks may supply other sperm banks or a fertility clinic with donor sperm to be used for achieving pregnancies.

A sperm bank recruits donors via advertising, often in colleges and in local newspapers, and also via the internet. A donor must be a fit healthy male, normally between 18 to 45 years of age, who is willing to undergo frequent and rigorous testing and who is willing to donate his sperm so that it can be used to impregnate women who are unrelated to, and unknown by, him. The donor must agree to relinquish all legal rights to all children which result from his donations.

A sperm bank takes a number of steps to ensure the health and quality of the sperm which it supplies and it will inform customers of the checks which it undertakes, providing relevant information about individual donors. A sperm bank will usually guarantee the quality and number of motile sperm available in a sample after thawing. They will try to select men as donors who are particularly fertile and whose sperm will survive the freezing and thawing process. Samples are often sold as containing a particular number of motile sperm per millilitre, and different types of sample may be sold by a sperm bank for differing types of use, e.g. ICI or IUI.
Sperm is produced by way of masturbation. The sperm will be checked to ensure its fecundity and also to ensure that motile sperm will survive the freezing process. If a man is accepted onto the sperm bank's program as a sperm donor, his sperm will be constantly monitored, the donor will be regularly checked for infectious diseases, and samples of his blood will be taken at regular intervals.
All sperm is frozen in straws or vials and stored for a minimum of 6 months before being released for sale and use to ensure that the donor remains healthy. Donors are subject to tests for infectious diseases such as human immunoviruses HIV (HIV-1 and HIV-2), human T-cell lymphotropic viruses (HTLV-1 and HTLV-2), syphilis, chlamydia, gonorrhea, Hepatitis B virus, Hepatitis C virus, cytomegalovirus (CMV), Trypanosoma cruzi and Malaria as well as hereditary diseases such as cystic fibrosis, Sickle cell anemia, Familial Mediterranean fever.
A sperm donor may also be required to produce his medical records and those of his family, often for several generations. A sperm sample is usually tested micro-biologically at the sperm bank before it is prepared for freezing and subsequent use. A sperm donor's blood group may also be registered to ensure compatibility with the recipient.